This Logan Symposium talk was in December 2014 and over 10,000 whistleblowers have now contacted us..

DAMAGE CONTROL: Blowing the whistle on the whistleblowing support industry

https://www.truthdefence.org/whistleblowers   (below is an extract from the report to give context for the following items)

"Our report focuses on one whistleblower support organisation in the UK that is at the centre of lobbying efforts for legislative reforms and which has relatively opaque links to US-based corporations that profit from whistleblowing.  Since 2018, Whistleblowers UK (sic, this should be WhistleblowersUK) (WBUK) has been the secretariat of the All Party Parliamentary Group on Whistleblowingbut we have gathered evidence pointing to potentially endemic conflicts of interest and a troubling lack of transparency, especially in regard to the organisation’s funding.

This evidence raises serious questions about the efficacy and integrity of the wider whistleblowing support network and suggests an urgent need for reforms that ensure adequate protections and support for whistleblowers who are financially disadvantaged. Above all, our report highlights the need for a major policy rethink on how to protect those who seek to genuinely disclose information in the public interest, especially in relation to systemic failures and including those from within the military and security state."    (End of extract)

​Quick warning:  It is wise to be cautious when deciding where to disclose because

without consent or had been passed to solicitors who were seeking personal injury claims business.

​For more on this please see The Misconduct of WBUK Part 1 below.

Part 2 is in preparation and we will update this page soon about the APPG, the evidenced serial liar Georgina Halford-Hall and WBUK.

We dedicate this website and the work of The Whistler to Gavin MacFadyen.

Please see the Gavin MacFadyen Award page and the video on there for a message from Gavin's wife Susan Benn. 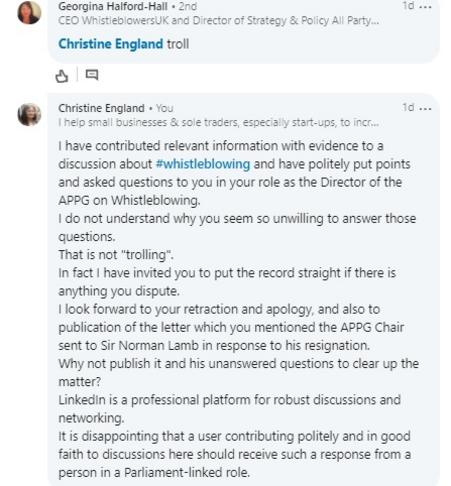 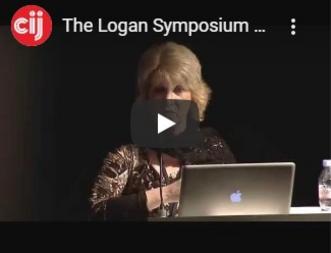 We help whistleblowers from all sectors.
We aim to provide
what we ourselves needed most
when feeling isolated,
someone to listen and understand.

All calls are in strict confidence.

Unlike some other helplines we never say
"take the money, move on and forget it now"
because what all genuine whistlers want is

action to put things right and 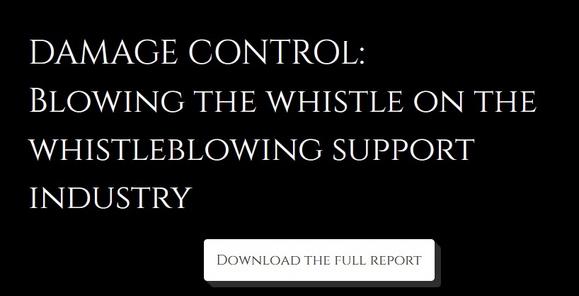 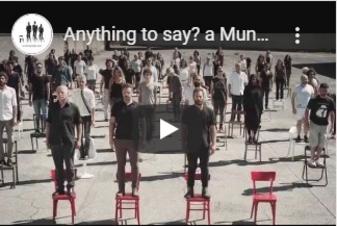 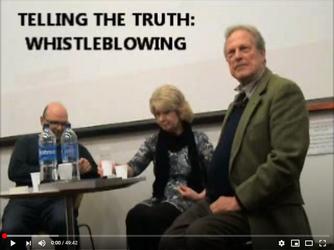 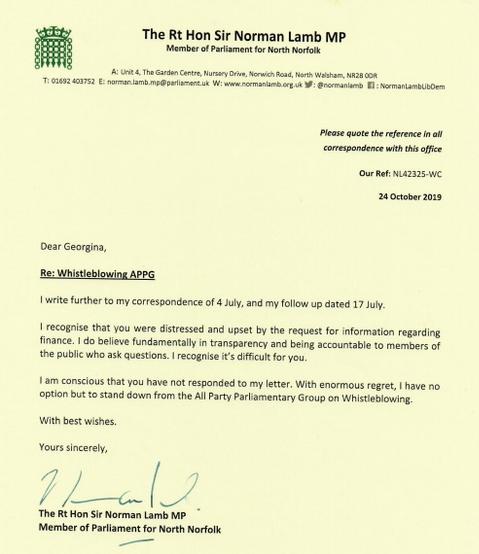 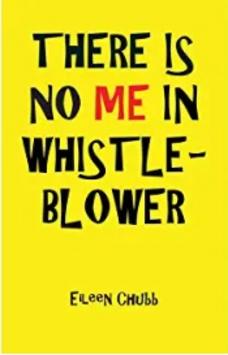 Georgina Halford-Hall is still in post, with a Parliamentary email address.  Her various false claims are easily disproved by public records

One of her online profiles states "In 2010 Georgina blew the whistle on governance irregularities while she was CEO of a small charity".

The Charity Commission has no record, past or present, of any charity named Mere & DIstrict Footprints Ltd which is where a

Georgina Shaw was Centre Manager (not CEO) in 2010.   It was a Respondent in an employment tribunal claim by a G Shaw-Halford in Bristol 2011.

The Employment Tribunal's 2012 Judgment (below) proves that the case was dismissed, not won.

It shows a second Respondent which was a charity, "4Children" - but the Chief Executive was Anne Longfield, not Georgina Shaw/Shaw-Halford.

Was there some other "charity" at which Georgina Halford-Hall was "CEO" or "chief executive" at same time as Centre Manager job or was she promoted?

Polite enquiries have been unsuccessful.

The Employment Tribunal says it has no record of any other cases matching her public statements that she "won" a case.

​The Truth Defence investigators put questions to Georgina Halford-Hall prior to publication but received no response.

The organisation of which she is now CEO, WhistleblowersUK has been repeatedly described as a charity in the media and also on LinkedIn by

Parliamentary Assistant & WBUK Executive Assistant Joe Styles & WBUK Director of Casework Danielle Roberts, even though it is not.

They both later corrected their profiles after we published about them.

Journalists, only some of whom later corrected this misinformation, decline to give the source of the charity description.

So do event organisers such as Inside Government, MLROs.com, InformaConnect and some journalists who decline to respond to requests

for factual amendments, eg Farah Khalique's conduct is noted as particularly disappointing in this respect.

We have had to obtain corrections of misleading articles by Ms Khalique and others.

​We have presented the documentary evidence numerous times including to the press offices of the Tories, Labour, LibDems and SNP.

All MPs were sent "The Misconduct of WBUK" by February 2020.   Some were informed of it in person as well.

With the current calls for transparency and accountability re #lobbying, now would be a good time for them to respond.

When will protecting people take precedence over bounty-hunting and trying to making money from whistleblowers?

Sir Norman Lamb resigned when he understood the serious issues we and others reported about WBUK​ and Georgina Halford-Hall.

Others still either don't believe those facts or ignore them or actively support GHH and WBUK.

also because GHH, its Director, has stated that all the allegations were "dismissed" and yet they stay.

​Why do they condone false claims and unethical conduct?   On what evidence did they dismiss the concerns?

We are whistleblowers who support the charity Compassion In Care and Edna's Law.

prosecute the malicious complainant(s) for giving it information which has been shown to be misleading. 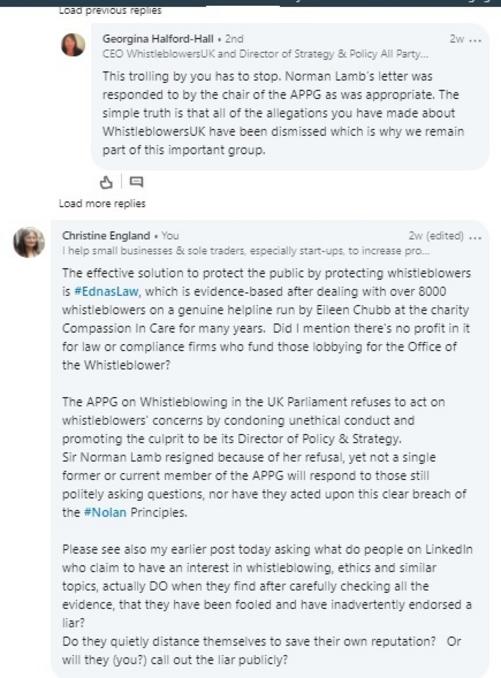 Georgina Halford-Hall, in her role as secretariat to the APPG, refused to answer his questions on finance.

He had already announced in August 2019 his decision not to stand at the next election which was known to be imminent, but he still put on record his reasons for resignation from this APPG.  He seemed keen to distance himself from it once he realised the issues.

His resignation came after we and other whistleblowers had repeatedly brought to the attention of all the APPG members the misconduct of WBUK and asked questions.  Those questions have never been answered because his resignation from the APPG was never announced publicly on their website or social media.

Every other member of the original and current APPG, is jointly responsible for this lack of accountability and transparency

because they all had the same information as was given to Sir Norman Lamb.

Georgina Halford-Hall claims that the APPG Chair responded to his resignation and that all allegations were dismissed.

But Sir Norman Lamb says he did not receive any response and that no other APPG members ever spoke to him about his resignation.

So they all condoned the lack of transparency and accountability and GHH's refusal to answer the questions.

Sir Norman advised us that our concerns should be pursued with the Parliamentary Standards regulator which we did.

So we blow the whistle on the APPG on Whistleblowing, which seeks to introduce an Office for the Whistleblower / #Whistleblowing Bill with the hidden agenda of creating lucrative business for WBUK/APPG's corporate funders, Constantine Cannon, Navex Global, Philips & Cohen, and other law and compliance firms.  They are interested only in ​cherry-picking cases which offer potential profit or publicity. 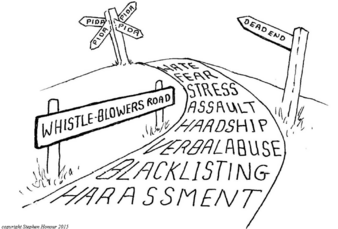 ​The Whistler has no allegiance to any political party because whistleblowers come from a wide range of backgrounds and opinions,

and such serious issues must never be used as political footballs by politicians.

We will be adding a new page to this website soon, about various MPs and Members of the House of Lords

and what they actually did when informed of whistleblowing incidents or when they were asked to help or to meet whistleblowers.

We will call out those MPs & Peers who claim to support whistleblowers in order to grab headlines but whose actions in reality do not support that claim.

We ask everyone to read our evidence and replace PIDA with Edna's Law.

So, as always, we tried to check the evidence because no response by the APPG Chair had ever been mentioned by

Sir Norman Lamb or by the APPG Chair or members in response to various enquirers.

Mrs Halford-Hall's response to that polite enquiry on LinkedIn

wasn't quite what is expected from a Parliamentary postholder, supposed to comply with the Nolan Principles:

​This website does not collect, store or process anyone's personally identifiable information.

The only data collected by the website analytics are the number of visits on which dates and from which countries they came.

(The above is written following technical information from GoDaddy which hosts this website, we are not technically knowledgeable ourselves.)

If you choose to contact us by telephone or email, your information will be held confidentially and securely.

If you contact us by phone you do not need to give your real name or any personal details.

​We are not a company, not a charity, not a club, and not any legal entity, so we will seek advice from the Information Commissioner's Office

on whether this privacy statement is sufficient for our informal network to use and we will update it if necessary.

Sir Norman Lamb, the alleged recipient of the APPG Chair's response to his resignation, says he never received any response. 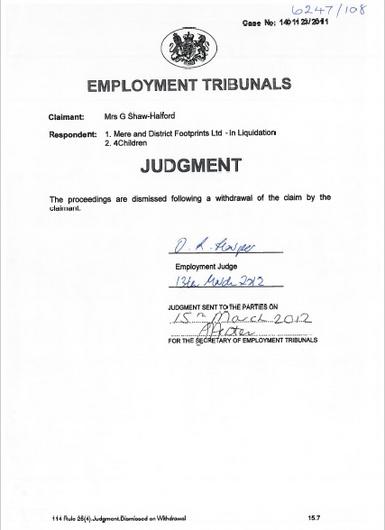 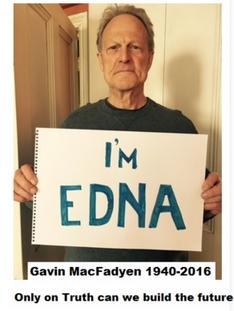 Be inspired by people of integrity who have had the courage to act in the public interest.

The best way to protect yourself and your loved ones is to protect the protectors.

Publication of Misconduct of WBUK Part One in November 2019 led to a series of legal threats and malicious allegations against Compassion In Care and supporters in The Whistler.

By December 2020 those complaints had included the Charity Commission, the Information Commissioner's Office and 3 Police forces.

We look forward to publication of Part Two and to long-awaited accountability for the evidenced serial liar Georgina Halford-Hall, WhistleblowersUK, all members of the All Party Parliamentary Group on Whistleblowing and all the academics, journalists and politicians who have condoned dishonesty and unethical conduct while claiming to support whistleblowers. 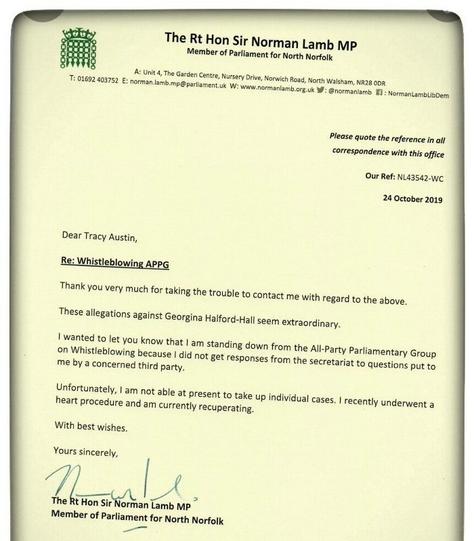 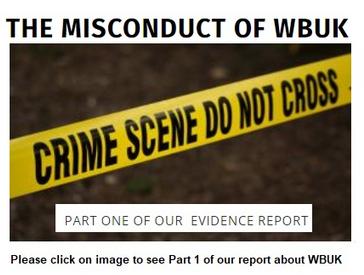 We feature the cases of a wide range of people (some famous, some not)

to show how anyone at work might one day have to make an important choice.

The whistlers all became aware through their job of wrongdoing or risks.

In many cases other people were also aware -

and had decided to look the other way or cover up.

The whistlers all tried their best to get things put right, often at great personal cost.

What would you do?

The Public Interest Disclosure Act (PIDA)
which was meant to give legal protection for UK whistleblowers,
has failed and offers false hope to many who seek protection.

We campaign for Edna's Law,
drafted by the real experts,

because we know what is needed.

#beajournalistlikeGavin - go out and tell the truth, not what the powerful want you to print!

They will be named as soon as their circumstances allow, meanwhile we compile their evidence ready for the inquiry.