Please click on Andrew's photo below to see his interview.

​Thank you to the Logan Symposium & the CIJ for hosting the 2018 Award. 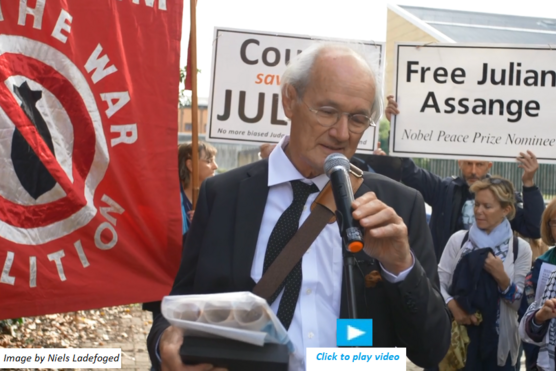 ​​"Protection by journalists of their sources is fundamental to the craft, there couldn’t be anything more important than if you give your word to defend and keep private assurances given to you by someone that you trust and believe, the protection of that person is everything that you stand for.    You’ve got to have the courage to say "I will go to jail rather than give up a source."      (Gavin MacFadyen introducing a Whistler event at CIJ)

Thank you to the Byline Festival and the Frontline Club for hosting the 2017 Award, thank you also to those here today, whistle-blowers, and those who have lost a loved one for the want of a whistle-blower.

Karl Flinders & Computer Weekly for their reporting of 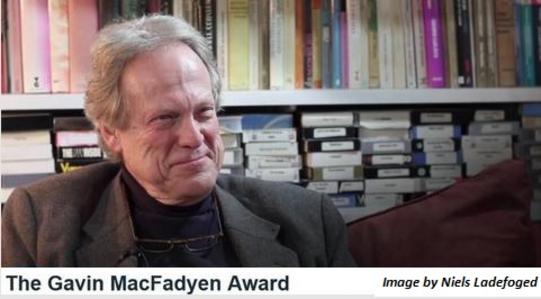 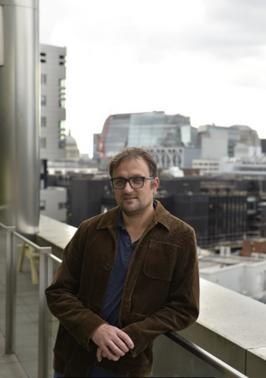 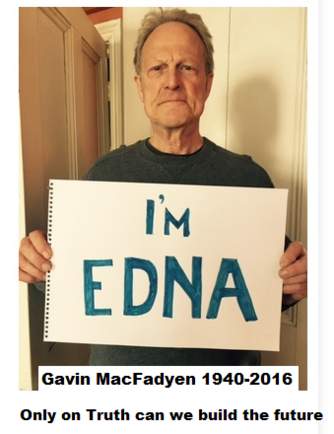 is the Winner of the Gavin MacFadyen Award 2019.

The crystal Award and Scroll with citation

outside Belmarsh Prison on 28 September.

Please click on photo above to see the event video.

Gavin was a great supporter of my work with Compassion In Care, the charity I founded to expose abuse and support whistle-blowers.
70% of the thousands of whistle-blowers contacting our help-line were from health and social care but the other 30% were from a wide range of other sectors.

Uniquely we also support those who have lost a family member for the want of staff speaking out or being ignored when they did blow the whistle.  I see both sides of the tragedy everyday, the injustice to the whistle-blower and the cost in suffering to those whose lives depend on someone speaking out.

Whilst I have never turned a whistle-blower away I recognised a need for an organisation to provide support to those from other sectors.

Gavin and I co-founded The Whistler, which is an extension of Compassion In Care’s ethical model.  Gavin and I had both resigned from WBUK due to our convictions that we were there to serve whistle-blowers and not the other way round.

This experience with WBUK defined our friendship and our determination to campaign for justice in the form of Edna’s Law.

Before I read the 2017 Award Citation (please see citation above at Byline Festival & Frontline Club) I would end by saying that:
The best way to measure if you have done a good job is how many people in government and institutions such as regulators hate you.
To make a difference you have to care, there is no balance or compromise involved in exposing abuse.
You have to care to be a whistle-blower and you have to care to be a great journalist.

for giving a voice to whistleblowers throughout the COVID crisis

Most Influential Journalist of the Decade is

Most Influential Publisher of the Decade is 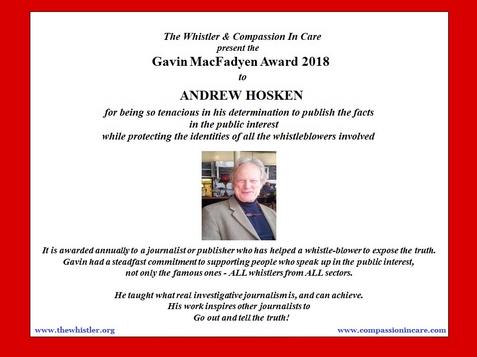 The Journalist whose work exemplifies the importance of a free press 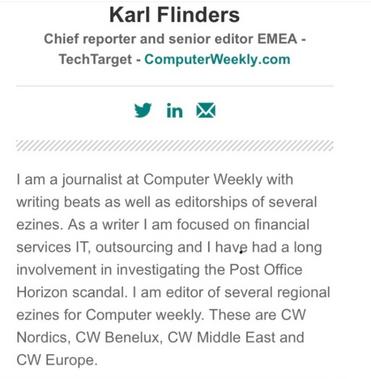 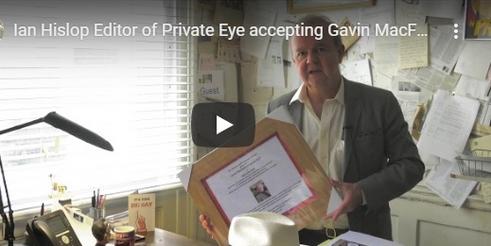 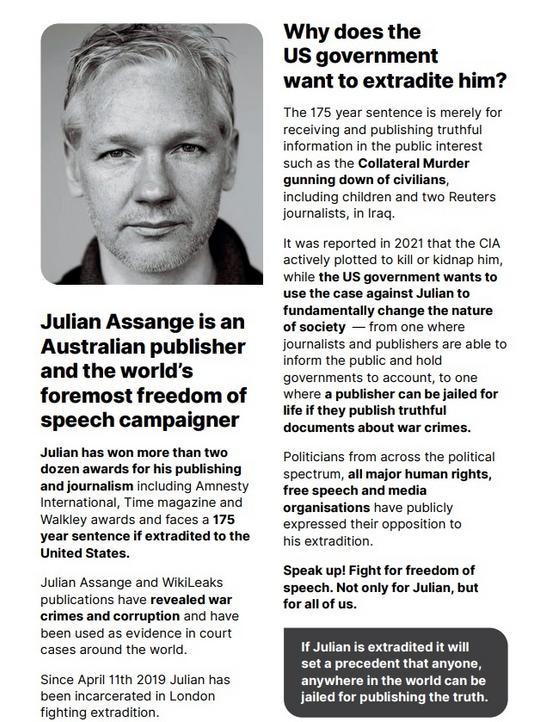 Below is the 2017 Award announcement in the Frontline Club at Byline Festival, where Michelle Sweeney spoke powerfully of how, even though she never met Gavin, his support for whistleblowers had helped her indirectly.  As a probation officer on Merseyside, Michelle spoke up in the public interest and reported failings which have now been upheld - but sadly too late for the victims Michelle had tried to protect. 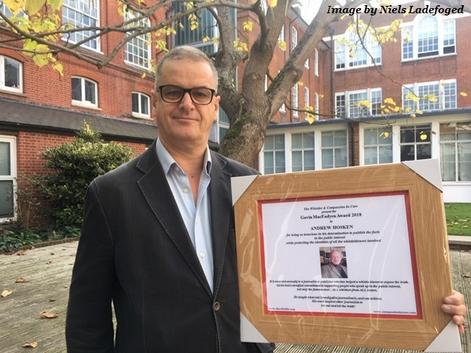 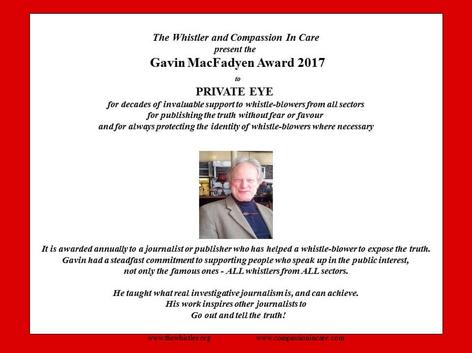 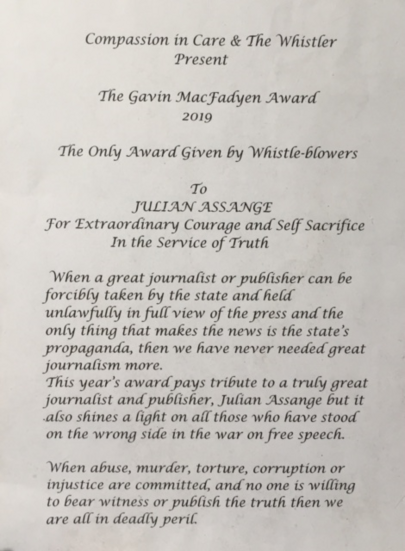 "Whistleblowers play a central part in correcting wrongdoing and injustice and all the filthy things that go on that nobody will talk about.   These people have the courage to do it so we felt we should support them. What they do is socially invaluable, absolutely fundamental to a democracy that there be open disclosure and accountability and without that we have a different kind of society.

Truth-telling is the essence of journalism in many ways.  It’s not what powerful people want you to print, it’s telling the truth about it, what you can see and observe and prove.  One of the biggest weapons you have in truth-telling are people on the inside who can tell you what’s really going on.     Their role with you is critical.  They give you a spark that allows a fire to be started to make reforms of a really important kind."    (Gavin MacFadyen introducing speakers at CIJ )

As both a whistle-blower who has seen first-hand the systematic torture of vulnerable people and through my work with thousands of whistle-blowers from all sectors who have contacted The Compassion in Care and The Whistler help-line,

I know what every whistle-blower has to fight can be summed up in one word, and that word is SILENCE.

Because it is SILENCE that allows the perpetrators of all abuse, torture, injustice, corruption and every other evil to thrive,

and it is SILENCE that allows those who harbour the perpetrators to thrive.

Whistle-blowers alone cannot fight the silence, only the media can help them.

I soon learned as a whistle-blower that reporting abuse is one thing but stopping abuse is quite another. It was the media that helped me.

We live in times of unprecedented attacks on free speech, whistle-blowers hounded, jailed and blacklisted, the media attacked, sanctioned and controlled.

The Gavin MacFadyen Award is the only award given to journalists by whistle-blowers, to celebrate all that is great journalism, but also

to raise awareness of the importance of a free press and to inspire the journalists of tomorrow.

When even the threat of legal action is allowed to stifle the truth we are all at peril but those at most peril are the victims of abuse, torture and injustice, those with no voice.

The inaugural Gavin MacFadyen Award has been won by Private Eye in special recognition of decades of great journalism which has helped countless whistle-blowers expose wrong-doing, but uniquely Private Eye gives us the whole story which includes the culture within organisations that punish whistle-blowers,

the failures of the authorities to act and how the justice system fails whistle-blowers.

For protecting their sources, and for publishing those facts that would never otherwise be made public.